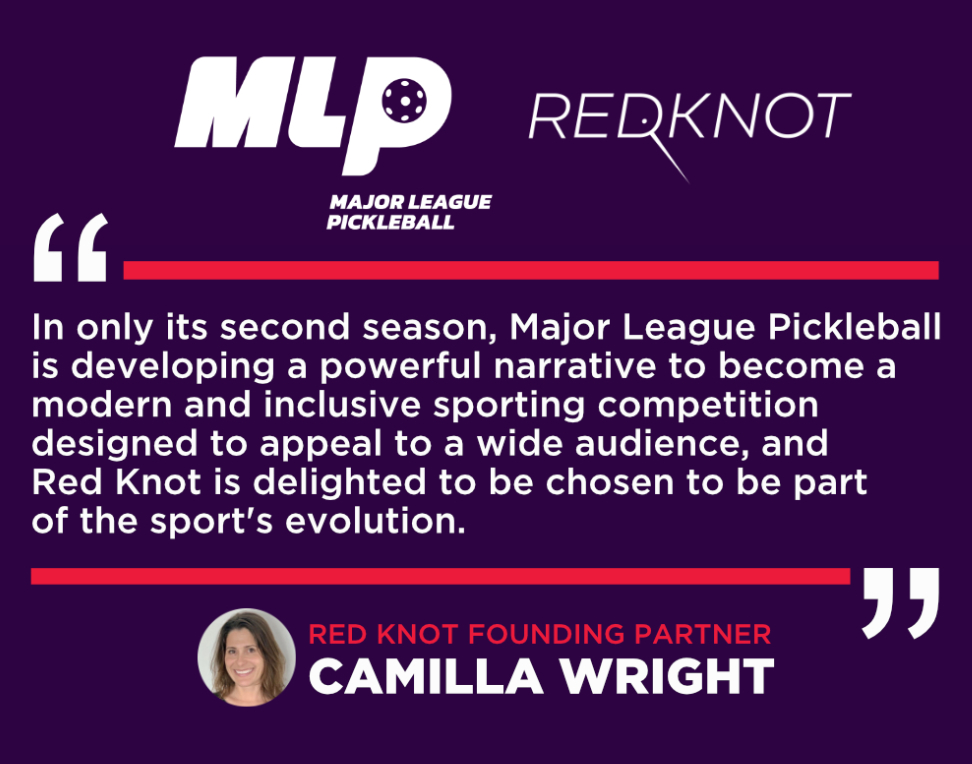 Austin, TX (May 17, 2022) – After a successful inaugural season, Major League Pickleball is back in 2022 with a much enhanced competition.

Red Knot, the boutique specialist sports and sports betting communications agency, has been re-engaged by MLP to provide strategic marketing and PR services ahead of its anticipated 2022 Season.

MLP is back this month with the highest prize money events in America's fastest-growing sport, iconic new team owners and an innovative draft approach.

"Red Knot has been part of the MLP story since the early days, and we look forward to extending our fruitful partnership in 2022 as we work together to grow America's fastest growing sport into an exciting and innovative professional competition, and produce premium pickleball content at broadcast quality which is groundbreaking for this emerging sport" - commented Brooks Wiley, President ofMajor League Pickleball.

"In only its second season, Major League Pickleball is developing a powerful narrative to become a modern and inclusive sporting competition designed to appeal to a wide audience, and Red Knot is delighted to be chosen to be part of the sport's evolution," added Camilla Wright, a Founding Partner of Red Knot.

The Red Knot team advising MLP has been bolstered for 2022 with the addition of Bruce Bundrant, CEO & Founder of Riviera Sports Marketing, who has joined Red Knot as a strategic advisor, with a special brief to develop the potential of Major League Pickleball. A seasoned sports & entertainment executive with a track record of building high-profile teams & leagues from scratch, Bruce brings a new level of experience to Red Knot and MLP.

About Major League Pickleball
Major League Pickleball (MLP) is the elite professional pickleball competition that sees teams of two women, two men, compete in a unique format that has set new standards in the fastest growing sport in America. MLP’s first-ever event, which took place in November, 2022, raised the bar for pro pickleball, introducing broadcast and event production innovations that saw MLP awarded the title “Event of the Year” by The Dink. In addition to MLP’s goal to create engaging new platforms to showcase the best professional female and male pickleball players worldwide, MLP is also focused on helping build the grassroots of the sport, attracting both new participants and fans to pickleball in the USA and worldwide. For more information on Major League Pickleball, go to MajorLeaguePickleball.net and follow Major League Pickleball on Facebook, Twitter, Instagram, TikTok, Pinterest and YouTube.